Showing posts from 2018
Show all

Giant Angoras, Made in USA

FROM GERMAN TO GIANT History of the Giant Angora in the USA
by Candy Haenszel, February, 1999

Giant Angora is a relatively new breed, yet it's history is already being forgotten.  Research through Angora News, Domestic Rabbits, and correspondence, has yielded the following history of the breed.

In the early 1980's, several Angora breeders in the U.S. and Canada, began importing Angora rabbits from different areas of Germany. The Angora News (newsletter of the National Angora Rabbit Breeders Club), in 1984 & 1985, ran ads for German Angoras, by Leslie Samson, Erica Lynne, Louise Walsh, Geri Couchman, Sunny Bixby, Shirley Braverman, and Liselotte Lenhart. There was also an article on Germans by Candace Carter from Ontario. These were some of the early breeders of German imports.

In the September 1985 edition of Angora News, appeared an article written by Louise Walsh, of Massachusetts, and her proposed Standard for "Commercial Angora (German Type)", which she would be p…
Read more

Pssssst, you hear about Sinfully Soft? 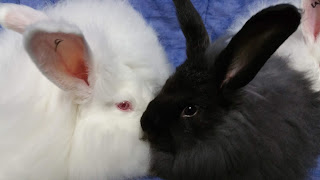 Whew what a journey, I have learned a ton!

This hat was inspired by 3 things;    My deep love for my Giant Angoras   My passion to learn new things, such as stranded knitting   My desperate need to use some of my overabundance of yarn stash

Mission accomplished!  Some of my stash has dwindled, well... ummm at least a little bit.  Every little bit helps.
My Fuzzy Love hat went through several versions, as I struggled not only with the designing, but the reality of knitting stranded color work.  I persevered, and I have learned a great deal!


The more I learn,  the more I realize how much I don't know.
With the help of several very talented knitting friends, by test knitting and sampling my Euphoria yarn, I have a great pattern to share.  I can now wear my Giant Fuzzy Love Hat with Pride, and you can too!
Click here for to purchase the pattern
In knitting my Giant Fuzzy Love Hats, in a few I used my Euphoria Angora yarn in both colors, and …
Read more
More posts